The flora has shifted on a step since I last wrote. Spring feels less fresh and new but more established. It’s got lighter in the evenings which has allowed for more trail running, which is liberating after a day in the office and helps me train for the Weald Challenge at the end of the month. Hawthorn blossom has taken over the hedgerows and archangel and bugle line many of the paths and verges. The woods are still full of bluebells but they’re starting to hang and not look as perky as they did. We’ve been watching the ash trees, worried about die back. More than half seem to be coming into leaf now so fingers crossed.  The wild garlic is blooming, bursts of brilliant white along the riverbanks. 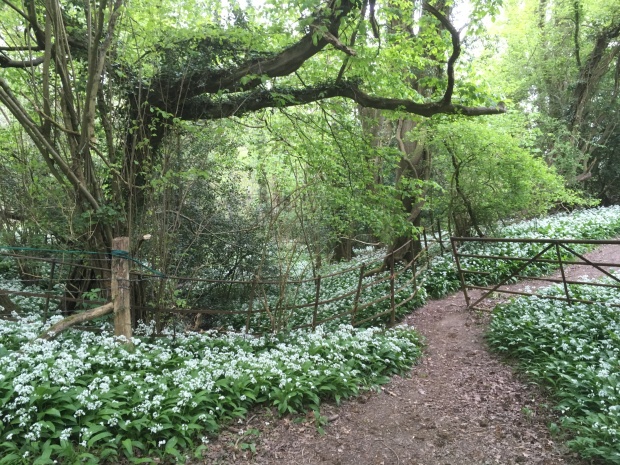 In the last two weeks the dandelions have quickly changed from golden dishes, to hazy spheres of seeds, to bare posts where the clocks used to be. A friend suggested I make dandelion and burdock. I looked up John Wright’s recipe. It would be interesting to substitute the sugar for a pale mashed wort. There’s no shortage of dandelions but I haven’t found any burdock yet.

The dandelion, wild apple and garden apple test tubes were stepped up to 250ml starters. I used smaller flasks this time to limit the oxygen and I will increase their volume to 500ml after a week. The dandelion samples weren’t a huge success: one smelt faintly of nappies and was binned, one was a bit vegetal and was also binned. The remaining tubes were either pleasant but indistinct or giving off some alcohol notes. These were propagated up into small flasks. Of the garden apple, some were pleasant but indistinct and not used, others were woody and not used, some had a green apple ester (possibly acetaldehyde) and were kept as were others that gave of a artificial red apple aroma (possibly ethyl hexanoate) but in separate flasks. As mentioned previously it’s funny that the yeast gives off aromas reminiscent of the fruit but this may be a coincidence. Of the wild apple, these were less distinct. Some had a sweet biscuity aroma, which were kept, some were fruity and also kept. Others were musty and ditched.

Early signs of activity from the wild apple

The centrifuge tubes of hawthorn and woodruff have been very active. The woodruff smells of coumarin but I assume that’s the leaves rather than the yeast. I left the woodruff in the tubes for most of a week, which was not my intention but I wonder whether the plant matter provides additional surface area for yeast activity, in the same way that beech chips are put into Budweiser. Not much aroma coming off the hawthorn but the bubbles smell clean. I loved Burning Sky’s Saison L’Hiver, which the brewery described as barren. I think I knew what they meant. There was something subtle that I couldn’t place.

There has been plenty of broom for a few weeks so I have collected that. I have been hunting for rowan, and seen it further afield, but held out for some locally. I spotted a tree this week within 1/2 a mile of the house so went back at dusk and collected some. They were cultured as before. 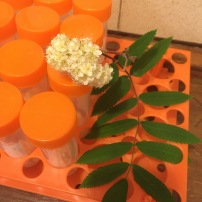 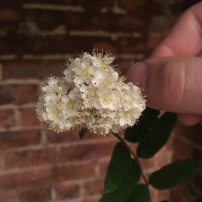 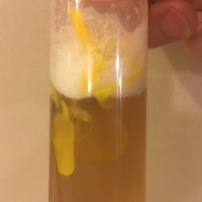 This weekend I took samples of the current demijohns (gorse, blackthorn and primrose), all of which are still bubbling. The gorse has been in the primary fermenter for four weeks. The gravity is 1.020 and the pH is 4.4. The sample was clear and smelt slightly of marzipan. I didn’t taste it as I thought the readings were a bit borderline and it hadn’t finished fermenting. The blackthorn and the primrose have been in primary fermenters for two weeks. The blackthorn was at 1.020 SG and pH of 4.2. It was cloudy and had a clove like phenol aroma. The primrose gravity had barely dropped at 1.050 although there has been reasonable activity in the demijohn. A head of neat small clean bubbles rather than a krausen. The pH was 3.7 so I suspect some LAB activity even though the hop bitterness was reasonably high (20IBU). The sample was cloudy and smelt of gooseberries.

The dilemma I now have is when to rack. I was intending to start propagating a mixed culture every 2-4 weeks once the fermentation had slowed and the gravity was below 1.010. None of the Demijohns have yet reached this point so: I could wait, I could rack them now or I could leave them for six months and blend the finished beers. If I rack them now it may cause the single flower beers to finish even slower but it may favour the faster acting yeast strains in the next batch. For the primrose, where the gravity hasn’t dropped much, I’m tempted to rack early. Little alcohol is being produced but the aroma and acidity is promising so might complement a blend rather than standing on its own two feet. Any comments?