In the last few weeks some of the meadow flowers have really peaked. One field in particular was a wash of colour, photographed by my wife. She identified spotted orchid, black knapweed, greater hawkbit, lesser stitchwort, selfheal, birdsfoot trefoil, yellow rattle, pig nut, yarrow, lesser trefoil and many more. It’s such a special place, breathtaking to see. The grass heads are now abundant and catching my interest. Perhaps they could be another source of yeast captures in future years.

Since then many of the fields have been topped and the hay collected in, changing the view across the valley dramatically. The fields are now pale and dry, in stark contrast to the mature dark green of the hedges and trees.

Meadowsweet is now thick and heady in the lower damper areas, lining ditches and road verges. In other areas rosebay willow herb is locally abundant, like cascading fountains of pink, at the station and some banks along the roadside. Neither are toxic so possibilities for this project. 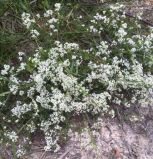 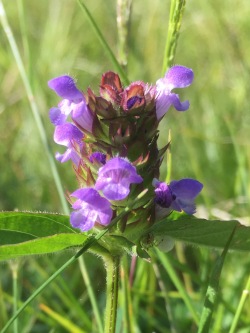 Tennis ball sized rabbits are now hopping around the garden, eating all the nice plants and with no fear of us. They’re safe for now. I’ve mentally earmarked them with “grow now, eat later”. We heard a fledgling tawny owl in the woods which caused some confusion; clearly owl-like but not a sound we were familiar with. My wife also heard a nightjar that I will have to listen out for.

The elderflowers and dog roses were removed from the centrifuge tubes after a couple of days. At this point they both smelt of the flowers; the rose less distinct than the elderflower. After two weeks these were sniff tested and stepped up to 250ml flasks. Of the rose, those that were sweet and floral were combined into one flask and those that had a touch of tang and funk were combined in another. None were discarded. Of the elderflower: two were perfumed, a bit funky and, like broom, giving of a pea flower aroma; two were flowery and spicy; and two earthy and musty, which were binned.

For the next brew day I wanted to try something different. I needed wort for the broom and rowan harvested yeast and I had a sachet of WLP566 Saison II yeast to use. I had also thought that a braggot fermented on saison yeast could be interesting. While I appreciate building a beer around a name is silly, I thought this combo would be “braison” and if it was second fermented on strawberries, peppered with grains of paradise and aged on rose petals it would be pretty brazen….

The Rowan flask had strong, but not unpleasant aromas of nail varnish. The gravity was 1.016, so had attenuated more than some and the pH was 4.0. This tasted of plums or stone fruit. The broom was less distinct. The gravity had only dropped a bit to 1.030 and the pH was 4.5. I decided not to taste this one because these levels were still high.

To get a saison base and the braggot base from the same batch I parti-gyled 50:50 by volume, adding a bigger dose of honey to the second gyle. My total grain bill, which was a variation on the second Funky Flower base used for blackthorn and primrose, was:

The mash was held at 65 deg C for 1 hour and then I continuously sparged two batches of 10 litres. From further reading, I possibly should have batch sparged taking two separate runnings but I don’t know how much difference this made. I originally intended to add hops at 60min, 15min and 0mins but the boil was extended for 15mins (while I nipped to the shops). Hop additions to each batch were:

In the last 5mins of the boil 250g Sussex Honey was added to the first, Funky Flower, gyle and 900g was added to the second, Braison, gyle with grains of paradise. I intended to add 0.5g but added 5g so this could be very peppery! Assuming 58% of fermentables were in the first half of the mash, the two batches were as follows once the honey was added:

The Funky Flower batch was split into two demijohns with the Broom yeast added to one and the Rowan yeast added to the other. The Braison batch was kept entire and a second fermentation will be conducted on 1.3kg(??) of locally picked strawberries. I will then split this batch, if it is not too dry, adding dried garden rose petals to both and adding some of the dog rose derived yeast to one for added complexity. I don’t think the honey had the sugar concentration I had expected so I will add more to the secondary to account for this – the braggot OG was 1.058.

I had a busy midweek evening bottling saison, stepping up small flasks and collecting more flowers while listening to the Foo Fighters Glastonbury set. This saison had fermented at snail pace, having been racked into secondary too early, I suspect. White Labs WLP565 has a tendency to stall and I think this happened in the primary, which I should have checked for. This was from the first Funky Flower base, from which the rhubarb saison was made. It is tasting promising however, if a little sweet at 1.016 SG. I would have liked to have added some wild yeast to a portion of this but I’m starting to feel a little overwhelmed by demijohns, if I’m honest, and hadn’t planned for this.

After two weeks in small flasks the rose and elderflower were stepped up to 500ml flasks. One rose flask had a fly in it so was binned. The other was floral, perfumed, a bit funky and musky. Both elderflower flasks were similar but stepped up separately, to avoid disappointment. I had forgotten my comments from two weeks ago but, again, they smelt like the broom samples – pea-like. There was also a thin film on them.

At 11pm I went out with the head torch to collect musk mallow from our overgrown garden and bramble flowers from the track. A fox screamed from very close by, making me jump out of my skin. Another called from further down in the valley. The musk mallow had come up wild in a big clump over the last few years and is looking great. The flowers had closed for the night and many grass hoppers and long horn beetles were using them as perches. On the track a fox paused, it’s eyes gleaming in my head torch. The bramble were a little over, and many fruit were forming, but enough fresh flowers remained.

As a side note my sour dough culture is pellicle-tastic. Having forgotten about the starter in the back of the fridge for a month I discovered it had grown a thick pellicle, dark from the whole meal flour I think. I poured away the pellicle and hooch, cleaned it, removed the top layer and fed it and after another 36 hours another, thin, pellicle had grown. I had also forgotten about the sourdough starter on malt extract from a few weeks ago. It too had grown a thick pellicle. I will definitely try brewing with this when I have more time. I could either propagate the bubbling floury mixture or the hooch, once the mixture has settled. 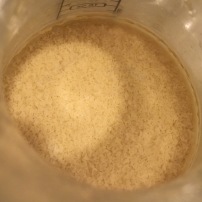 I’m quite keen for some results now. I have 10 demijohns filled from this experiment with no clue whether they’re any good.   At least three should be ready to taste blend and bottle by the next brew day. I’m keen to move on to the next stage.