I returned home from a week away to balmy temperatures and spring in full swing. Driving back from the airport, the hedgerows were flush with new green leaf, the white of blackthorn and cherry and the yellow of primrose and daffodil. At home brambles on the track were coming thick and fast, the grass was needing a cut, and saplings are coming up in the lawn where the chickens had scraped a bare patch last year. Common dog violet have come up near the house in increasing numbers which are a delight.

The garden will have to wait as I had brewing to do and mirroring natures activity outside it was a manic rush to get everything done. I completed my first double brew day, which was about 13 hours from start to finish. With only one set of equipment I overlapped the second mash with the first boil. A friend had asked me to brew for his wedding. I brewed a Vienna lager for him a month ago that is lagering in a fridge. This weekend I also brewed a light American pale ale, full of body and hoppiness but only 3.9% ABV in the style of Weird Beard Little Things That Kill. The second beer brew of the day was the base beer for the first set of funky flowers (gorse and catkins), which followed a saison recipe I had used before but with Vienna malt replacing Munich malt and a touch of Cara Munich added. Finally, if two brews in one day wasn’t enough, I bottled the wild portion of the meadowsweet saison that has been slowly bubbling for six months. (Note to self: check the size of the crown caps before you fill the bottles!…)

I had already had a sniff of the wild flower yeasts, which had been stepped up in a starter for two weeks, and decided to use just one of the two gorse flasks and ditch the two catkins. The most promising gorse flask smelt of pear drop, strawberry and coconut. The pH was 2.9. I gingerly tasted a small amount which tasted clean and sweet (not fully attenuated). I swirled and poured the flask contents, still containing gorse flowers, through a muslin into a 5litre demijohn of the base beer.  Next time I might step up the starter again to an intermediate OG rather than jumping from 1.035 to 1.060 (any comments on this?). As there didn’t seem to be much sediment I only inoculated the single batch and fermented the remaining 15litres with White Labs WLP 565 Belgian Saison I. I intend to “dry hop” 5litres of this with a heap of wild flowers in the secondary and see if I can get a secondary fermentation akin to the meadowsweet saison. Maybe I’m wrong on this, and overly confident after my initial successes, but this seems like a less risky way to introduce wild cultures as the fermented beer will protect itself from some beer spoiling nasties.

The second gorse was interesting. Similar to the first but also smelt like hospitals, with a sanitary, alcohol aroma. After swirling I t also reminded me of lambic. There was a big floating platform just below the surface. White, unblemished, and not furry, I’m tempted to say it was a pellicle rather than mould but it didn’t match any of the pictures on Milk the Funk’s excellent site. See photo. Any suggestions? I have strained the flask contents into a jar with some more wort for further inspection in the coming weeks. 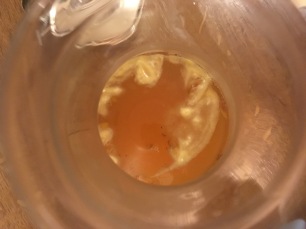 The catkin flasks, which had been the most active, smelt of sweat and, as my wife’s experienced nose spotted, the nappy of a teething baby – acid nappy! It “singed the nostrils” as Ron Burgandy would say. Unsurprisingly this was dumped, and with the kitchen stinking I went outside into the cool night air to clear my lungs.

The blackthorn and primrose were ready to step up to conical flasks after two weeks in centrifuge tubes. I was excited about the blackthorn which had fizzed and given off aromas of spicy saison and cherry from the tube a week or so ago. When opened, three of the tubes smelt this way, plus a bit of nail polish. Two of these had a distinctive bubbly pellicle on top. The other three were woodier, earthy but not unpleasant. These were poured into two separate flasks with 250ml of aerated wort at SG 1.035. 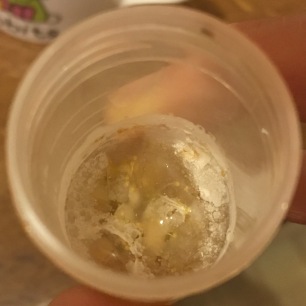 The primrose were more neutral smelling. Some had a small beard of mould where the flowers were above the surface, which I removed. When shaken, two smelt earthier and funkier and three smelt sweet. These were added to separate flasks. Another smelling slightly of nappy and another smelling of cabbage were discarded.